Lights from hundreds of candles twinkle on the water. Each one carries prayers and wishes sent off to float down the rivers and streams. In Thailand, the Loy Krathong festival is celebrated each year. This festival is celebrated by the locals to drive away their sins and misfortunes. Also, the Hindu goddess Ganga, the goddess of the water, is thanked for using her water and the locals excuse themselves for polluting the water.

When is Loy Krathong celebrated?

Loi Krathong takes place on the evening of the full moon of the 12th month in the traditional Thai Lunar Calendar; hence, the exact date of the festival changes every year. In the Western calendar this usually falls in the month of November. In 2016 it was celebrated on November 14th, in 2017 it will be celebrated on November 3rd and in 2018 on November 22nd. The days before the festival takes place, you will see the Thai making their own Krathong.

What is a Krathong?

A Krathong is an offer put into the river. The meaning of Loy is floating. In short, ‘Floating Offer’. The traditional Krathong is made from the inner part of a banana tree. After this it will be decorated on the outside with flowers and on the inside with incense sticks and a candle. Often a coin is used to serve as an offer to the riverside. The modern Krathongs are nowadays made of bread. 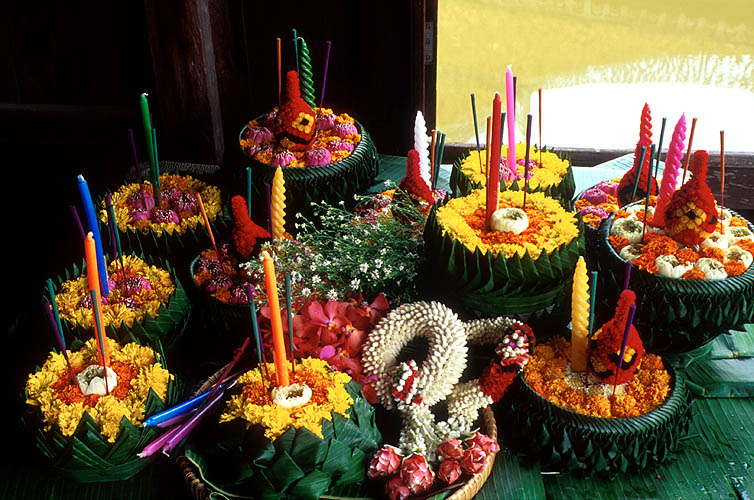 As a visitor you can choose to make a Krathong yourself or simply buy them from vendors located near the dedicated river, lake or event.  Opt for a biodegradable Krathong to stop the Chao Phraya river from being congested and polluted so avoid plastic or pepper foam Krathong and choose a bread-Krathong instead.

During the evening of Loy Kratong it gets very busy along the Chao Phraya River in Bangkok. It will therefore be difficult to find a good place to sail your Krathong over the river. Nevertheless, the crowds give a very beautiful picture as the many Krathongs change the water into a kind of dream. Sailing dreams on a dream itself.

The main Loy Krathong celebration in Bangkok is typically held at Asiatique.  The Thai celebrate it here on the night market and admire beautifully colored firework shows from the river banks. Keep in mind that traffic in this area will be very bad and there will be queues at the Saphan Taksin BTS Station shuttle boat. In the Old City it is celebrated along the banks of Wat Saket and nearby Phra Athit Pier for those who are staying in the Khao san Road area.

During this festival many hotels host a Loy Krathong event at their swimming pool area. Hotels located along the river Chao Phraya are particularly popular during this festival and often have organized events with special dinner and fireworks. 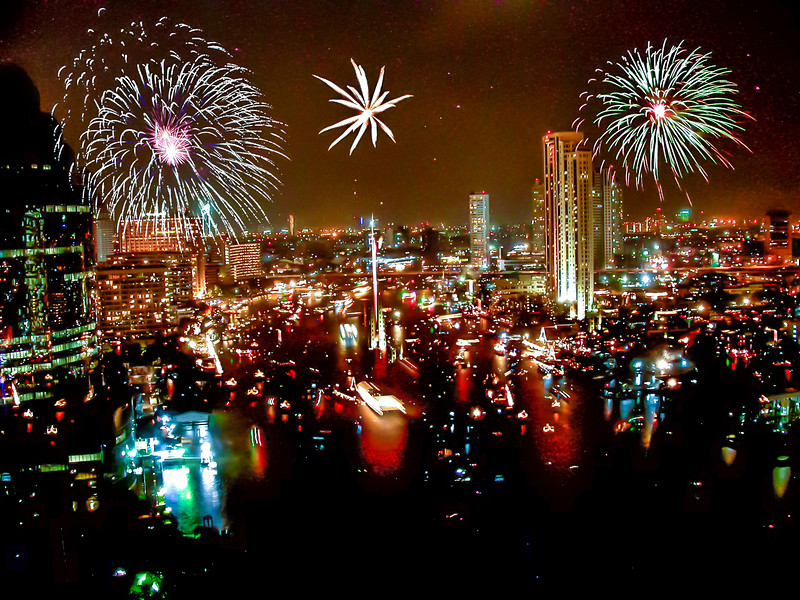 The following locations in Bangkok are typically a good place where people offer their Krathong to the goddess of water.

An alternative for those who want to explore the REAL Bangkok at a more relaxed pace. Our boat and walking tours are perfect for the photo enthusiast, non-cyclist and anyone with a curious mind.

Co All Day: 9 hour bike/boat/train tour
The must-do tour for the hardy adventurer or for those who just wish to extend their bicycle tour experience a bit more.  One of the highlights include travelling by train, longtail-boat and local transport.

Co by Night: 3 hour bike tour by night
Our bike tour in the cooler evening air through Chinatown and charming Thonburi.  The skyline of Bangkok by night is one of the highlights on this 3 hour bike ride.

Co Rocket Boating: 5 hour multi-Boat Tour (James Bond Tour)
This 5-hour multi-boat tour introduced us to the locally known 'James Bond boat' due to its appearance in the 007 thriller 'The man with the golden gun'. Experience life along Northern Bangkok's rural canals where the thrill of the high-speed rocket-boat is just one of the highlights.

Co Walking: 2 hour Walking Tour
This 2-hour walking tour takes you to the hidden alleys of Bangkok’s Chinatown by foot. Walking this area is more relaxing and intimate than cycling and perfect for photographers.

Thai Travel SIM-Cards | What you Need to Know

6x Why a Bike Tour is a Must Do in Bangkok

First time: What to Do in Bangkok in ONE day?

Area Guide - What to Do Around Co van Kessel Office

Spirit Houses in Thailand | What Are They for?

The Rules and Etiquette of Thai Temples

TRANSPORTATION GUIDE:  How to Get Around Bangkok